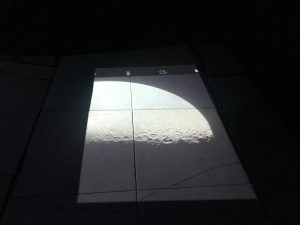 Projection of the image of the moon as seen through my 6″ Newtonian onto the sidewalk.

If you’re like me, you’ve had the “outreach itch” for a while now, especially when the Comet C/2020 F3 (NEOWISE) streaked across the Northern skies. But setting up a telescope and inviting strangers to look through your eyepiece is not an option these days. 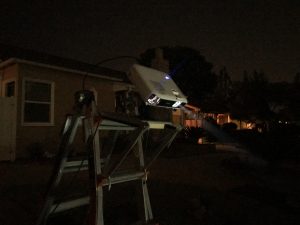 The idea here is to take the view in the telescope, image it with your video device, and project that onto the sidewalk (or a wall, or portable screen, etc). Now folks can see what you’re looking at from a safe distance.

A little bit of sidewalk chalk and you can even advertise the day before. Let all the dog walkers and kids in the neighborhood know that they can take a walk on the moon tonight!

While the moon was certainly the best “wow factor”, we were also able to clearly see Jupiter and its moons. Saturn was a bit more of a challenge, but that was mostly due to the seeing.

We were also surprised how early you can setup. I figured we’d have to wait until it was really dark, but just a little past sunset and you could quite easily see the projected image on the sidewalk. 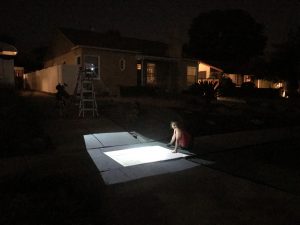 This shows the whole setup. My Newtonian is to the left of the A-frame ladder. The iPhone is connected to the projector with a lightning-to-HDMI adapter.

This entry was posted in Uncategorized. Bookmark the permalink.